In early 2020, GalCan Electric & General Contracting, LLC, was well positioned for the year ahead. Established in 2005 by spouses Patricia Jones, who serves as president, and Allan Jones, the company’s CEO, GalCan had become a leading provider of electrical services to the New Orleans metropolitan area. They were on track to meet current goals, were participating in sustainable community redevelopment projects and were running a paid mentorship program introducing girls to the construction industry. In short, things were going very well. 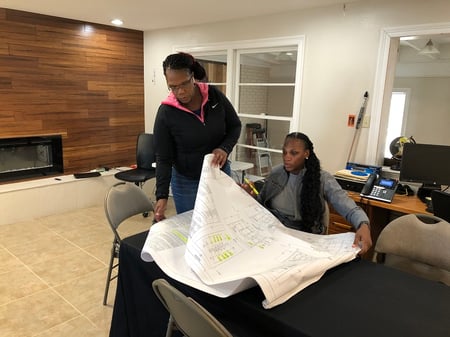 Then COVID-19 hit, and the work orders stopped. “I had people ready to work, and I couldn’t send them anywhere,” said Patricia Jones. “My people were feeling afraid, and they needed to support their families.”

In addition, Jones faced the possibility of losing highly trained master electricians, many of whom had come up through the company’s own apprenticeship program. “To lose people that you’ve trained, that’s years of investment in employees, and it could all be gone from COVID.”

Seeking a Solution
GalCan is far from alone in facing this dilemma. Businesses small and large across the country are enduring everything from temporary shutdowns, reduced operating capacity and layoffs to bankruptcy and permanent closures.

The federal Paycheck Protection Program (PPP) has offered some relief. As of June 30, 2020, the program had approved 4.9 million loans, with an average loan size of approximately $100,000.1 However, many minority- and women-owned businesses have found difficulties obtaining PPP funds.

For example, just 12 percent of black and Latino business owners who applied for PPP loans say they received what they asked for, compared to 38 percent of all U.S. small businesses.2 Of businesses receiving PPP funds, approximately 31,000 identified as woman-owned, compared to 159,000 identifying as male owned.3

Fortunately, GalCan — which is both a minority- and a woman-owned business — had an existing relationship with Hancock Whitney and could turn to the bank for guidance Hancock Whitney has been a leader in helping Gulf South businesses of all types access PPP funds, approving 12,000 loans totaling more than $2.4 billion, with 67 percent for amounts under $100,000.

Building A Relationship
GalCan was introduced to Hancock Whitney when its former financial institution was acquired by Hancock Whitney in 2017. Since then, Jones has developed a strong relationship with her local financial center manager, with whom she has regular quarterly meetings. “It’s a larger bank, but still has the connectivity feel,” she said.

That connection proved useful as Jones faced the challenges of a pandemic. “Because I already had a relationship with Hancock Whitney, we were already talking about different bank products,” she said. “We already had a line of credit being worked on, and we were talking about the PPP loan from day one. I was already putting together the package [of documents] that was needed.”

Managing through the Crisis
Jones saw the PPP funds GalCan received through Hancock Whitney as a stop-gap measure that would allow her to support her team, which she views as family. “We could’ve shut everything down and waited it out at home,” she said. “But looking at the families connected to our decisions, we thought, ‘How can we make it work?’” 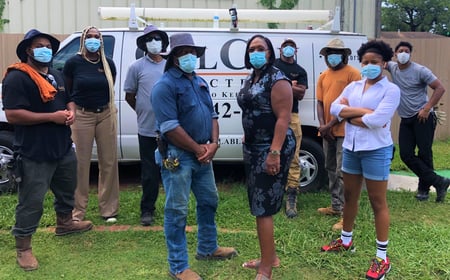 With the PPP funds and a deferment on the line of credit payments, GalCan has been able to keep its workforce in place and paid. Jones has also relied on Hancock Whitney’s regular updates to stay current on PPP changes. “When information is coming in from all over the place, to have that kind of resource from your banking partner is phenomenal,” she said.

She’s continued her personal connection with her financial center manager, too. “The relationship is real, because we’re spending time speaking with each other,” she said. “As a small business, you have to get comfortable with financial services and leaning on your banking advisors to tell you what they have. Information is power.”

Looking Forward
Jones isn’t complacent about the future, though. “We’re still going to be operating skinny because we don’t know how long this is going on,” she noted. “Every day, I just keep breathing.”

However, by the end of July, the company was caught back up on line of credit payments, was beginning to get paid for work again, was seeing growth in a new area (home warranty service calls) and had won a bid on a new construction project. “We’re back on track,” said Jones. “The trajectory is going well, and I’m confident GalCan will be around for a long time. I have confidence that we have the systems in place — our internal infrastructure is strong enough to weather the storm, and we have the strategic partnerships to make it work.”

3: “Where are all the women-owned firms on the list of PPP loan recipients?” Heather Grossman, BossBetty.com, posted July 7, 2020

Veterans Day is a day of celebration to honor America’s veterans for their patriotism, love of country, and willingness to serve and sacrifice for the common good.

During late October, Hancock Whitney associates, clients, financial centers and our community found itself in the path of a major storm for the eighth time during the 2020 Hurricane Season. While some of our areas had escaped damage from smaller storms, many across our footprint were still reeling from damage caused by Hurricanes Laura, Sally and Delta.

October was Disability Awareness Month. At Hancock Whitney, we celebrated associates who give back and inspire others to join in their service. Serving others gives our associates the opportunity to be a voice and speak up for the groups they're passionate about. Serving communities through volunteerism brings people together to share their voice and work jointly for a greater impact in driving change and creating a culture of inclusion – helping individuals reach their full potential.