October was Disability Awareness Month. At Hancock Whitney, we celebrated associates who give back and inspire others to join in their service. Serving others gives our associates the opportunity to be a voice and speak up for the groups they're passionate about. Serving communities through volunteerism brings people together to share their voice and work jointly for a greater impact in driving change and creating a culture of inclusion – helping individuals reach their full potential. 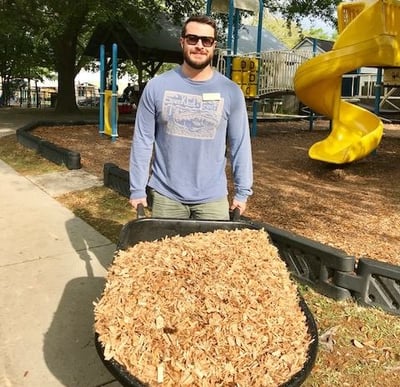 Biloxi, MS Commercial Banker Justin Chance volunteers with Disability Connection in Ocean Springs, MS to build a playground for all to play. 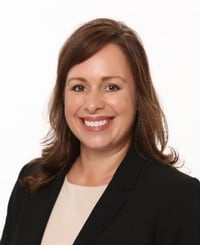 "Serving on a board for a greater cause lends itself to personal fulfillment," says Julie Nosser, who has been on the board of Lighthouse Louisiana for several years. Lighthouse is a 100-year-old organization that empowers people with disabilities through services, employment and advocacy.

“I fell in love with the Lighthouse and its mission as I saw firsthand the impact the organization has on people with disabilities in our community,” she says.

The organization has state-of-art manufacturing facilities in New Orleans, Baton Rouge and Gulfport, which creates jobs for people who are blind. They also operate many other programs for adults and children, such as summer camp, transportation, low vision clinics, vision rehabilitation, deaf services, orientation and mobility, and sensitivity training.

“It is so inspiring to see people with disabilities prosper when they are provided opportunities and support,” Julie says. Lighthouse focuses on “people first” language, encouraging everyone to see the person first – not the disability. “It’s heartwarming to see real inclusion in action, and Lighthouse does this on a daily basis.”

Being involved in diversity and inclusion efforts is important to Julie because she has been on the receiving end of exclusion in her more than 20 years of banking, she says. Also, she enjoys being involved in the community to serve as an example for her two sons. Excited by the momentum Hancock Whitney has with its diversity and inclusion efforts, she says she is energized by the intentional conversations going on and the awareness being created. 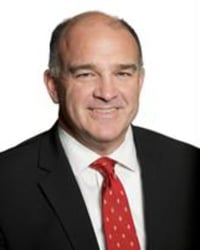 "When most people think of the ADA, they picture an individual with a physical challenge, such as someone in a wheelchair or who is deaf or blind," John Rigney points out. "The ADA covers a broad range of medical conditions," he says, "both physical and mental, including intellectual and developmental delays."

For the past several years, John has been proud to work with an organization that supports individuals with intellectual and developmental delays – the Arc of Greater New Orleans. He first became involved with the group after the birth of his daughter, when she was diagnosed with a developmental delay as well as some physical challenges. The Arc provided occupational, physical and speech therapies at John’s daughter’s daycare. John later learned when speaking with parents of older children that prior to the ADA, most daycare facilities would not accept individuals who had physical or mental challenges. “What I didn’t realize at the time was that all was possible thanks to the ADA,” he says.

To learn more about the ARC visit https://arcgno.org/. 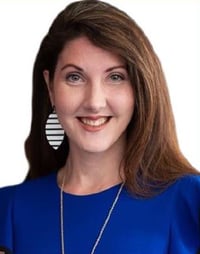 Tara’s career growth is a direct result of what she’s practiced in raising her daughter, Charley, who has autism. Her passion for taking the “qualitative” and proving it with the “quantitative” has come through many times with countless teams telling them Charley “wouldn’t or couldn’t.” “This skill came about through my desire to prove her abilities with data then taking the outcome and creating an action plan from it.” She applies that skill to the teams she leads.

Growing up, Tara’s mother said “love is love” and that she didn’t identify as gay or lesbian. She fell in love with a woman who became Tara’s step-parent and who later transitioned to male. “I realized that the gender of the person my mom, or anyone, loves doesn’t matter,” Tara says. Her mother’s partner would go on to raise Tara, take care of her children and love her unconditionally. Gender had no meaning in their dynamic.

Tara’s advocacy for those that are different took center stage when her daughter, who is now 6, was diagnosed with autism. She has made it her mission to fight for her child, and children like her, to help them be seen as capable, incredible humans. Tara’s main goal is to have her daughter and people like her be accepted and seen for the potential they bring. “They deserve every opportunity given to their siblings and typically developing peers. I work to create an environment that Charley can be a part of, where she can be a part of a workforce that sees her and not just her disabilities.”

Charley is highly empathetic, which has helped each member of the family deal better with their own emotions and feelings. This attention to emotions has been transformative for how her family operates, and they give all the credit to Charley. “She has taught us that the person we see standing in front of us doesn’t tell the whole story.”

"Inclusion is key," Tara says, so people like her daughter and people of all races and backgrounds are one day hired for their abilities and not passed aside because of their disabilities or color of their skin. “I am both passionate and committed to a diverse and inclusive workplace because I know firsthand the success that can come from varied perspectives.”

The treasures and talents that people like Charley have to offer should not be overlooked in the workplace, Tara says. There may be limits to what they can do, but they may be able to offer different assets as well. The key is finding those assets and discovering how to use them in a way that best suits the individual and an employer. Transparency and realistic expectations make this possible.

Tara has been with Hancock Whitney for more than 7 years. She is proud to be part of Hancock Whitney’s inaugural Diversity & Inclusion Council. “It gives me the platform to ensure our children grow up with opportunities to live to their fullest potential with a company that will not only accept their gifts, but also celebrate them.”

About Diversity and Inclusion
At Hancock Whitney, we celebrate our diversity and appreciate the contributions, differences and experiences of our associates. Through the Courageous Conversations article series, we hope to spark curiosity and understanding while respectfully navigating diversity topics, educating one another and more.