Economy remains in good shape for 2019

Despite the fact that growth and corporate earnings aren’t expected to reach last year’s lofty heights, the U.S. economy appears to be headed for a strong 2019.

The consensus expectation is the gross domestic product (GDP) growth trend will subside about half a percentage point to around 2.5% in 2019. Meanwhile, corporate earnings growth, after climbing to levels well above 20% in 2018, should fall back to a still quite healthy range of around 5-10%.

Uncertainty is helping to moderate economic performance projections for 2019, as a number of situations bear watching.

The certainty of regular, quarter-point short-term interest rate hikes in 2018 is giving way to a lack of clarity over what action the Federal Reserve will take on rates in 2019. Increasingly, due to a number of potentially destabilizing situations around the world and domestic market concerns, experts believe the Fed may slow or suspend the series of rate hikes it initiated back in late 2015.

Any further escalation of the trade war with China looms as a potentially destabilizing factor for the Chinese economy, one that could have a ripple effect globally, impacting Europe in particular because it’s such a major Chinese trading partner. Given the integrated nature of the global economy, the U.S. ultimately could feel a negative impact as well. Port cities like New Orleans and Houston that rely on global trade could feel a real pinch.

Capital spending has been somewhat restrained in the U.S. during the current economic cycle, due to uncertainty on various fronts that’s impacting long-term planning. But the trade war with China could disrupt the global supply chain and actually alter that trend in one way: Some production of sensitive internet and network technology might start migrating from China back to the U.S., setting up the possibility of better-than-expected capital spending in 2019.

Further destabilization in Europe, where growth has been slowing, could create additional headwinds for the U.S. economy.

The European Central Bank has announced plans to end its quantitative easing program and start raising interest rates by mid-year. If it doesn’t, there’s the potential for a weaker euro and an even stronger U.S. dollar, which could put a crimp in U.S. manufacturing export profitability.

Brexit is another wild card in Europe. If the United Kingdom can’t negotiate a favorable agreement for exiting the European Union by the end of the first quarter — and a looming March 29 EU departure date — that would likely be incredibly disruptive for the U.K. economy, at least for a couple years.

We’ll be watching consumers closely to see how they react to global economic developments, as well as other destabilizing events should they occur, such as a continuation of stock market volatility and political unrest. If consumer confidence does wane, the first cracks will likely appear in employment figures.

Too early for the “R” word

With a global slowdown already underway, an unresolved trade war with China and a volatile stock market, among other concerns, some are starting to talk about the possibility of a recession in 2019. But such speculation seems premature. While the probability of recession has been inching up, it remains quite low. We continue to expect only minor deceleration in GDP growth, continued corporate earnings growth and generally strong economic performance for the year.

For an in-depth discussion about a review of 2018 and the 2019 outlook by our entire Asset Management Team, click the play arrow below. We also invite you to download our complimentary whitepaper. 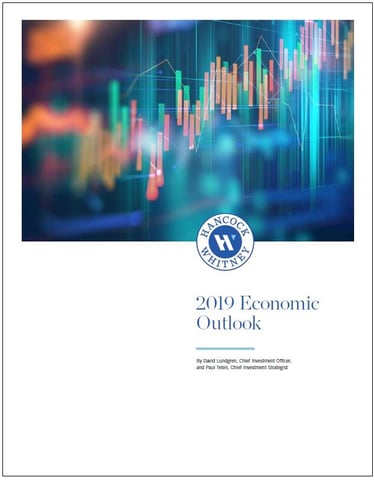 The information, views, opinions, and positions expressed by the author(s), presenter(s) and/or presented in the article are those of the author or individual who made the statement and do not necessarily reflect the policies, views, opinions, and positions of Hancock Whitney Bank. Hancock Whitney Bank makes no representations as to the accuracy, completeness, timeliness, suitability, or validity of any information presented. This information is general in nature and is provided for educational purposes only. Information provided and statements made should not be relied on or interpreted as accounting, financial planning, investment, legal, or tax advice. Hancock Whitney Bank encourages you to consult a professional for advice applicable to your specific situation.