Seven months before the Treaty of Versailles officially brought World War I to a close 102 years ago, an armistice, or ceasefire, on the eleventh hour of the eleventh day of the eleventh month had halted hostilities between Allied nations and Germany, essentially ending “The Great War.” A year later, President Woodrow Wilson designated November 11 as Armistice Day, a day for “solemn pride in the heroism of those who died in the country’s service and with gratitude for the victory.” 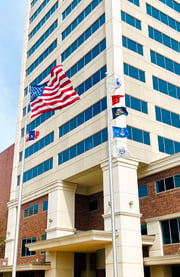 Over the next 50 years, Armistice Day evolved into Veterans Day, ultimately on November 11—no matter what day of the week. Veterans Day pays tribute to all American veterans for their courage, patriotism, and personal prices paid to safeguard our democracy.

This Veterans Day, our Hancock Whitney family salutes those who served in the armed forces to fight tyranny and terrorism in domestic and foreign domains. Because of their service and the sacrifices they and their families endured, we can live and do business in a land of opportunity.

Patriots Always
Global events remind us that veterans’ deep commitment to country and comrades doesn’t end when formal service stops. Long after retiring their uniforms, many carry on a strong sense of what General George S. Patton, Jr., said about being a soldier: “It is a proud privilege to be a soldier—a good soldier—with discipline, self-respect, pride in his unit and his country, a high sense of duty and obligation to comrades and to his superiors, and a self-confidence born of demonstrated ability.”

In other words, once a soldier, always a soldier.

Challenges don’t disappear when deployments are over, either. Going to battle begets powerful emotions and uncertainties. Similarly, coming back home can create anxieties for veterans and active duty alike. After months in desolate places plagued with conflict and subpar socioeconomic conditions, returning to our proverbial land of plenty can take physical and psychological tolls.

More than 20 million veterans live in the United States. Most served during wartime. That great American spirit still beats strong in their hearts. As we honor their service, we must make concerted, respectful efforts to understand their stories. We must also reach out to active military, veterans of all eras, and their families with encouragement, empathy, and resources to help make and sustain successful transitions from service to civilian life.

Heartfelt Gratitude
At our company, we’ve always felt inspired by and indebted to the men and women in uniform protecting our United States against our enemies and the veterans who served with and before them. In the past, we’ve offered extended hours for military members to bank based on their schedules. To help national defense during world wars, we promoted war bonds. We opened many of the first bank branches on Gulf Coast military bases. We’ve proudly championed and contributed to countless organizations helping and honoring military members and families, including the renowned National World War II Museum in New Orleans.

To veterans in communities we serve and across the country, and to our associates who are veterans, we profoundly appreciate your service, valor, and devotion to our Nation. We thank you and your families for all you do and all you give up to keep us free. We honor you for embodying core values fundamental to our country’s founding and at the heart of our company.

On this eleventh day of the eleventh month and every day of every month, may God bless and watch over all veterans, all active duty personnel, and all those they love.