Hattiesburg, Mississippi is the state’s “Hub City”—a flourishing center for education, healthcare, military, business, and residential development booming with opportunity. The region is also a big part of our Hancock Whitney family, a market integral to our organization’s success as one of America’s strongest, safest banks and the largest bank headquartered in the Magnolia State.

By naming Michael Schloegel, one of South Mississippi’s most accomplished young bankers, as Hattiesburg Market President, we’re building even more on our longstanding commitment to the people and communities in Mississippi’s Pine Belt. 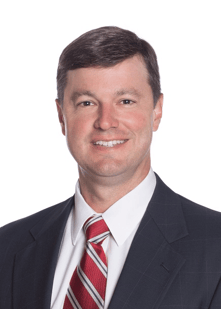 Hancock Whitney was born and remains based in South Mississippi. Michael is a born-and-raised South Mississippian whose family has been an integral part of the Hancock Whitney organization for more than 60 years. He’s worked hard to establish himself as a recognized leader in our state’s banking arena—including serving as president of Mississippi Young Bankers—and in our communities. That’s why we believe he’s a natural fit as market president in a region so important to Hancock Whitney; and his promotion represents our ongoing, significant investment in the market.

He’s an advocate for the Hancock Whitney tradition of 5-star service that has helped clients grow and protect their hard-earned assets and sustained us as a long-standing partner for South Mississippi’s success since 1899. His keen local insights, banking expertise, and passion for helping people achieve their financial goals and dreams will further strengthen our capacity to help create opportunities throughout the Hattiesburg region.

Michael received a Bachelor of Business Administration degree in banking and finance from The University of Mississippi. He also graduated from the highly regarded Mississippi School of Banking and the prestigious Graduate School of Banking at Louisiana State University. In addition to being a past president of Mississippi Young Bankers, he’s served as the state’s representative on the American Bankers Association Grassroots and Advocacy Committee and on the Mississippi Bankers Association Legislative Committee. Former Mississippi Governor Phil Bryant appointed Schloegel to represent the 2nd Supreme Court District on the board of directors for Mississippi ABLE, a program administered by the Mississippi Department of Rehabilitation Services to help Mississippians with disabilities have savings accounts that do not affect their public benefits.

A Leadership Gulf Coast alumnus, he is enrolled in the Gulf Coast Business Council Masters Leadership Program and earned One Coast accolades as a Top 10 Community Leader under 40. He’s also been instrumental in establishing and executing Hancock Whitney’s financial education alliances with South Mississippi schools and nonprofits.

We’re honored and proud to announce Michael Schloegel as Hancock Whitney’s Hattiesburg Market President as we work together with clients, local leaders, and communities to facilitate even greater quality of life and economic success for the people who make the Hub City their home.

During Hancock Whitney Founders Month, we continue our founders’ legacy of empowering people through financial education to become responsible citizens that will build prosperous futures for our communities. But, a focus on financial education isn’t regulated to October; financial education is important to us every day. Schools, churches, business and civic clubs, Junior Achievement, chambers of commerce, rehabilitation and recovery agencies, and other organizations engage our associates to help young and old alike learn the value of good financial habits at every stage of life.

In the late 1800s, our forward-thinking, community-minded founders established a bank dedicated to serving growing Gulf South regions and helping people achieve their financial goals and dreams. Guided by the Honor & Integrity, Strength & Stability, Commitment to Service, Teamwork and Personal Responsibility at the heart of who we are since our first day in business, those early Hancock Whitney bankers always focused on ways to help make life better in the places we called home.

Florida’s workforce has the third slowest recovery rate as the nation deals with the economic fallout from the COVID-19 pandemic, with only Georgia and Kansas faring more poorly, according to personal finance website WalletHub’s recently released study. However, Hancock Whitney has stepped up to lead COVID relief and support for communities in need around the state.