The calming presence and 100-year history of the Joe Morris & Son Funeral Home belie the adventurous, entrepreneurial spirit of the family that founded it, the Morrises. Hailing from the West Indies, their forefather, Richard R. Morris, descended on the shores of Pensacola sometime in the early 1800s as a young stowaway and shipwreck survivor. The intrepid nature of his family carried on through Richard and Dave Morris, who established the first Morris Funeral Home in Pensacola, Florida in 1913 as some of the first black morticians in the area.

Decades later, when David Hawkins took over the still-running family business in 2016, he could have never imagined a far-reaching virus would shake the foundations of the company within his five years of ownership.

“I had mixed emotions about the pandemic,” said Hawkins. “It was one of the worst things that happened to us. We lost our general manager to the effects of the virus in November of 2020. We lost friends. People weren’t coming out to funerals and only requesting graveside services.” 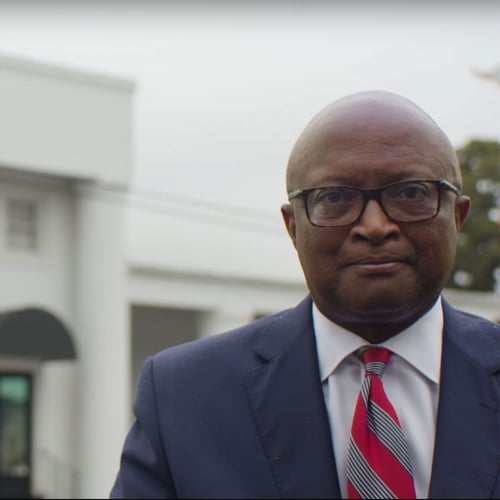 But he summoned the same pioneering spirit of the former owners, reaching beyond the immediate circumstances to think of how best to serve his community.

“When you start thinking about your business, you think about your family there. I have nine full-time and 10 part-time employees. This is their livelihood. And we’re serving people in grief, who need us. Think about that,” said Hawkins.

While navigating personal losses, PPE measures, and facility cleanings, he turned to his banker, Hancock Whitney Senior Vice President Brad Schild, for advice. Hawkins had developed a deep relationship of trust with Schild because Schild had helped him cultivate his “bankability” to the point of owning a multi-million dollar company — the Joe Morris & Son Funeral Home. The acquisition was more than a financial investment to Hawkins. It was the fulfillment of a promise.

Hawkins had grown up spending his summers and holidays shuttling back and forth from Alabama to Pensacola as a child. In Florida, he ended up one backyard away from the Morris family. Hawkins quickly formed a fast friendship with the similarly-aged Joe Morris Jr., and the family embraced him as one of their own. The family hired Hawkins to do odd jobs around the mortuary as a child and later hired the freshly-graduated Tuskegee Institute alumnus as a part-time employee.

Even though Hawkins pursued another profession for years after his part-time position at the funeral home, he kept in close touch with the matriarch, Gladys Morris. Gladys would often contact him and ask him to help her with special projects at the mortuary when Hawkins took up long-term residence in the area.

“One day, she sat me down and said, ‘Son, you need to buy my business. I’ve had a lot of offers, but I keep coming back to you. Get your people, come back, and talk to me.’ I’d been around this business all my life and always thought, ‘What if?’ Even when I haven’t been in the business, I’ve been in the business.”

This path led him to Hancock Whitney’s doorstep, after exploring relationships with other banks.

“Even if you don’t have all the tools you need, if you’re working with the right people, they can point you in the right direction. They provided resources, consulting, and more. It’s not just a business; they are my partners.”

Under Schild’s direction, that partnership not only helped him acquire a business in 2016, but helped stabilize it in 2020 through a PPP loan that allowed Hawkins to cover payroll, including employee raises, and other operating expenses, so he could continue to invest in his business. “I never thought I could qualify for it, and within a few days, they processed my application and told me I should expect to receive funds," said Hawkins in disbelief. The business experienced a period of relief, and Hawkins has nurtured it through careful financial planning.

Hawkins hopes to impart the same window of opportunities to young hopefuls that the Morris Family and Hancock Whitney extended to him.

“If you dream and plan, you can do it. And that’s something I try to impart on them every day,” said Hawkins.