The Pride and Privilege in Saluting Our Veterans

When Germany, Austria-Hungary, and the Ottoman Empire surrendered on November 11, 1918, World War I battles ceased as Allied Forces, including America, Britain, France, Russia, and Italy, began peace negotiations with Germany which ultimately ended the war. One year from the day the fighting stopped, America marked the first “Armistice Day.” A 1926 congressional resolution called for an annual observation; and by 1938, November 11 had become a national holiday honoring veterans for service and valor.

Although Veterans Day evolved at the end of what was then considered “the war to end all wars,” the men and women of our armed forces have been earning our undying gratitude since our founding fathers set forth the foundations of our Nation. Generation after generation, their commitment to service has far exceeded what most of us can fathom; and because of them, our democracy has endured for nearly two and a half centuries. We as Americans must never take their dedication and sacrifice for granted.

I’ve shared in the past my personal connections and appreciation to veterans, including my Dad, uncle, and others who fought courageously in World War II. Additionally, I’ve had the supreme privilege to be part of honor flights taking veterans to view war memorials in Washington, D.C. and to talk with veterans involved with the National World War II Museum in New Orleans. The emotions that envelop us during those trips and conversations—from fond reminiscences to fierce loyalty to quiet tears—say more about our veterans’ unfaltering patriotism than any words could convey. You see in their faces a pure, unencumbered love of country, comrades, and fellow citizens. You feel in their presence an unspoken, inspiring spirit of all that is good and just and right about our country. 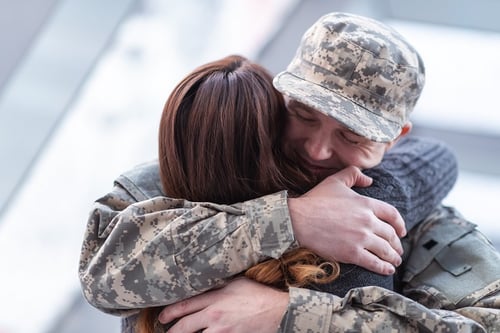 In today’s world of bitter partisanship and unnecessary division among Americans, it’s an incredibly moving experience to watch a family reunite as our soldiers disembark from the aircraft or ship bringing them home. A few days earlier, those men and women were warriors in a foreign place and in harm’s way. Then suddenly, they’re with their loved ones again, including children. There’s no more beautiful moment than seeing a soldier or sailor hug and kiss their kids for the first time after a long deployment.

On Veterans Day and every day, we must take time to thank, honor, and learn from military veterans of all eras. These men and women have faced and defeated America’s foes in every arena. Their bravery has helped secure the lives we lead as free Americans, and they’ve faithfully passed the eternal flame of liberty’s defenders to today’s military.

We at Hancock Whitney offer our deep appreciation to all veterans, including many of our associates, for their service and to their families for their sacrifices. To their successors—our active duty military and their loved ones—we offer further gratitude for safeguarding the core values forming the cornerstone of our country. Together, you have reinforced the opportunities freedom brings and assure our future as a strong, safe United States. Thank you.

As COVID-19 swept the nation and unemployment began to reach staggering heights, the housing crisis quickly escalated, leaving Americans seeking aid. Residents throughout the Gulf Coast region have been faced with the threat of evictions and the lack of funds to pay for housing, but many are receiving a lifeline.

Rooted in tradition and excellence, Hancock Whitney’s purpose is to create opportunities for the people and communities we serve. Young people are our future leaders, public servants and entrepreneurs. Investing in them helps our communities excel. 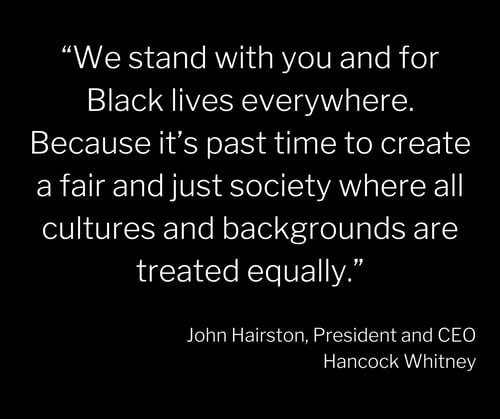 At Hancock Whitney, we stand with you and for Black lives everywhere. Because it’s past time to create a fair and just society where all cultures and backgrounds are treated equally.