Consider opportunity costs for “money on the sidelines”

States are opening up as vaccinations continue, but many individuals and companies are extremely risk-averse as we come out of the pandemic. Many investors parked cash in no- or low-risk investments as the pandemic persisted, and now, many are continuing to take a wait-and-see attitude as they determine what to do with their money.

Money on the sidelines

The result of this approach is what many economic experts call “money on the sidelines,” where both companies and consumers are keeping cash in ultra-low interest bank accounts, instead of putting money into investments that might yield higher returns, like stocks, equipment, or real estate.

In our lifetime, there has never been a time where this trend has been so prevalent. Currently, there is an estimated $5 trillion on the sidelines, according to CNBC, which is far above the record $3.8 trillion in cash held back during the financial collapse in 2009.

Consumers are saving at record levels

Consumers, who are estimated to have $2 trillion in individual bank accounts according to the FDIC as of the end of 2020, normally keep 7%-8% of their income in savings accounts, but are currently keeping more than 30% in low-risk, low-return accounts. 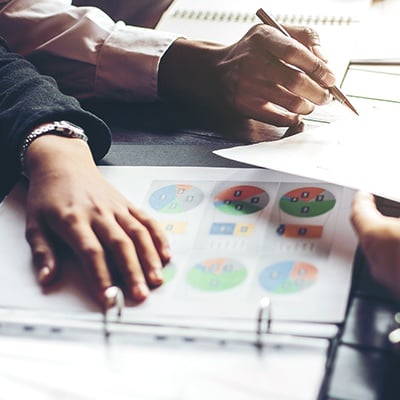 The Paycheck Protection Program (PPP) has collectively guaranteed more than 10 million loans to small businesses at a cost of nearly $800 billion, as of April 25, according to the U.S. Small Business Administration.

Banks and Congress anticipated PPP loans would follow a simple pattern: Money would be deposited into checking accounts of small businesses, then the money would be spent. But many small businesses saved their PPP money instead. For example, 82% of U.S. small business employers applied for a PPP loan, and of those, 77% received the entire funding amount requested. Still, nearly half of those companies reduced the number of workers they employed, according to a survey by the Federal Reserve.

Estimates in consumer and small business savings do not take into account the impact of the recent $2.2 trillion stimulus package passed in March, which included a $1,400 check for many Americans. Banks, like Hancock Whitney, are seeing this stimulus money sitting in accounts, waiting for the right time to be spent or invested.

There are opportunity costs of money on the sidelines

All of this has created high opportunity costs – the cost of what you’re doing right now vs. what you could be doing – for individuals and businesses. For example, the opportunity costs of keeping all of your money in money market and other nearly risk-free accounts is the interest you are losing by not having a portion of your cash in investments like real estate, stocks and bonds that offer the possibility of better returns.

Additionally, the opportunity costs are even higher for businesses that are delaying facility expansions or hiring new employees to maintain unusually high levels of savings. The cost of not growing your business needs to be weighed against keeping all of your money on the sidelines.

What does all of this mean to you as a business or individual?

There are plenty of reasons why some of your money should be relatively risk free, but it isn’t smart to do that with all your money. Hancock Whitney bankers are ready to inform and guide your business and individual decision-making with investment options as well as business and consumer loans.