Helping Revive Downtown Hattiesburg One Restaurant at at Time

College students working at restaurants is nothing new. Yet Nelson Haskin, Jr., who started his college career under a chemistry scholarship, fell in love with the vibrancy and dynamics of restaurants while waiting tables and cooking in the kitchens. “That lasted about a year once I realized there was more to chemistry than the periodic table,” recounted Haskin humorously about his first year in college. “I fell in love with how restaurants work and with being an entrepreneur.” Twenty-five years later, Haskin owns four (and one in the making) restaurants in Downtown Hattiesburg, Mississippi. 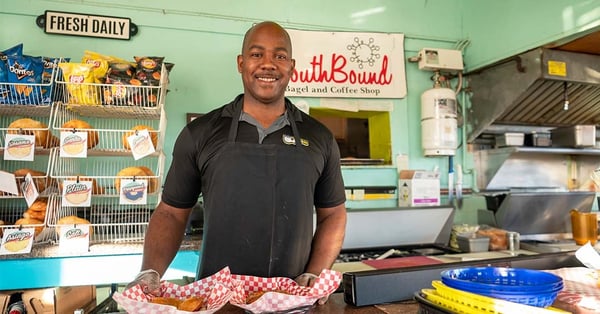 Originally from Gulfport, Mississippi, Haskin is a retired Sergeant First Class in the United States Army and was a Recruiter for the National Guard. His experience in the armed forces taught him time management and resilience. “As an entrepreneur, that helps,” described Haskin, who is now part of the revitalization movement of Hattiesburg’s historic district.

Following his deep passion for food and music, Haskin wanted to stand out from the crowd when building his career as a restaurateur. "I just wanted to be different. All (Hattiesburg's) downtown is food. I wanted it to be an experience," said Haskin.

The restaurant business is a family affair, and Haskin's wife, adult sons, and parents help manage the four establishments located one-eighth of a mile from each other. While Haskin thanks his family for their support, he acknowledges that "having someone to pick up the phone" and "meet you where you are" financially was an opportunity that brought his restaurants to life.

Haskin admits that being an entrepreneur is hard, so when he mentioned his challenges to Shawn Harris from Hancock Whitney while serving together on the Board of Directors of the Downtown Hattiesburg Association, he then recognized the need for a financial institution he could trust.

Having a partnership with leaders in the community is as important to Haskin as making the people he employs proud. “This is part of my story. I want to impact others. My goal is to create something the employees are proud of…everybody that works with me has a piece of the success story,” expressed the businessman proudly. 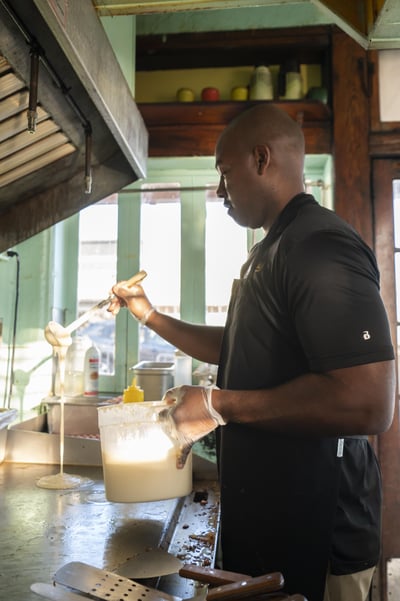 Hattiesburg’s revitalization is booming, “and to make that happen, you need to have a group of people who want our downtown to grow into what it used to be.” Haskin considers his restaurant business “just a piece of a puzzle” of the collective intention of bringing people back to a restored historic district. “There are a lot of people who were here before I was, so I'm just kind of playing my role, but it's always an honor to be a part of all of it,” he said.

Thankful for this journey, which started in 2017 when he opened Blu Jazz Cafe (“a labor of love,” he said) in a building with space for only thirty-two people, Haskin admits that, although he doesn’t have a lot of regrets, the early struggles “made me what I am today.”

Blu Jazz Cafe is today a successful restaurant that serves “soulful yet Cajun-styled” foods with live music by local bands. Haskin's first eatery is also a Best New Restaurant of the Pine Belt winner.“ Love food, love music, love life” is Haskin’s signature phrase. Honoring this sentiment, he and his team serve locals and tourists in all his restaurants on Front Street knowing that they will look back in ten or fifteen years and realize that they were part of downtown’s revitalization. “We all love food, I love great music, and when you bring them together, it just makes your life better,” he said.

After opening the NOLA-inspired Nellie's Chicken and Daiquiris in 2018 at the original location of Blu Jazz Cafe, “Nellie,” Haskin’s high school nickname, expanded his vision and acquired Southbound Bagel & Coffee Shop by accident. In a conversation with the shop owner, Haskin learned that he was selling the business. Haskin took the opportunity and now the shop matches his objective of “filling a void (in the city’s restaurant scene)” and “looking for things that I think could be good, fast, and easy.”

Haskin’s “love food, love music, love life” legacy widened with the opening of Hattiesburgers and Blues, which is quickly becoming famous for its live music, gourmet burgers, and draft beers. “I don’t really do it for fame,” noted the restaurant owner, hoping that one day he can give back to the community by helping young entrepreneurs, especially African Americans, to identify and overcome the hurdles of becoming business owners.

Haskin's success and community leadership is not going unnoticed. The Mississippi Small Business Administration (SBA) recently named Haskin the 2022 SBA Minority Small Business Champion for creating innovative small businesses that fulfill vital needs in the community while providing jobs and economic development. And Haskin isn't quite done yet. He and Hancock Whitney are working together again to open another restaurant later this year or in early 2023. Bourbon on Front, located within walking distance from Haskin's other restaurants on Front Street, will be a steakhouse that highlights good bourbon and the same passion for his city, the people he serves, and the community he's helping rebuild.

Enter your first name, email and comments below

College students working at restaurants is nothing new. Yet Nelson Haskin, Jr., who started his college career under a chemistry scholarship, fell in love with the vibrancy and dynamics of restaurants while waiting tables and cooking in the kitchens. “That lasted about a year once I realized there was more to chemistry than the periodic table,” recounted Haskin humorously about his first year in college. “I fell in love with how restaurants work and with being an entrepreneur.” Twenty-five years later, Haskin owns four (and one in the making) restaurants in Downtown Hattiesburg, Mississippi.

Owning a home continues to be the American Dream for people across the nation. Many consider homeownership the cornerstone of building generational wealth and an important factor to creating long-term financial stability for individuals and their families.

Throughout the month of March, we have been celebrating Women's History Month with a number of initiatives and programs here at Hancock Whitney. To recognize the richness of our own women leaders and their accomplishments, we asked associates to nominate an outstanding woman at Hancock Whitney to be honored as  "Women of Excellence." From these overwhelming submissions, The Diversity, Equity and Inclusion (DEI) Council selected women who exemplify leadership, achievement, courage, service, strength and dedication in the workplace and community.