Limitless — Dr. Marcus Jones is the Realization of his Ancestors’ Wildest Dreams

Standing on the Seven Oaks Stage as the 20th president of Northwestern State University in Natchitoches, Louisiana, a Black man honoring the first seven Black students to attend the university, Dr. Marcus Jones could not help but feel the enormity of the moment.

“I’m standing there as the first Black president of the university, next to one of the first Black students to integrate the school,” Jones said. “When you talk to them, and you talk to others, older people around the city who remembered that time then and used to work in labor jobs at the school, to see this happening now is something that they thought they’d never see someday.”

In July 2021, Jones stepped in as the interim president of Northwestern State after spending a year and a half as executive vice president and chief operating officer for the University of Louisiana System. Four months later, in early November, Jones was unanimously elected as Northwestern’s president by the Board of Supervisors for the state’s largest higher education system. 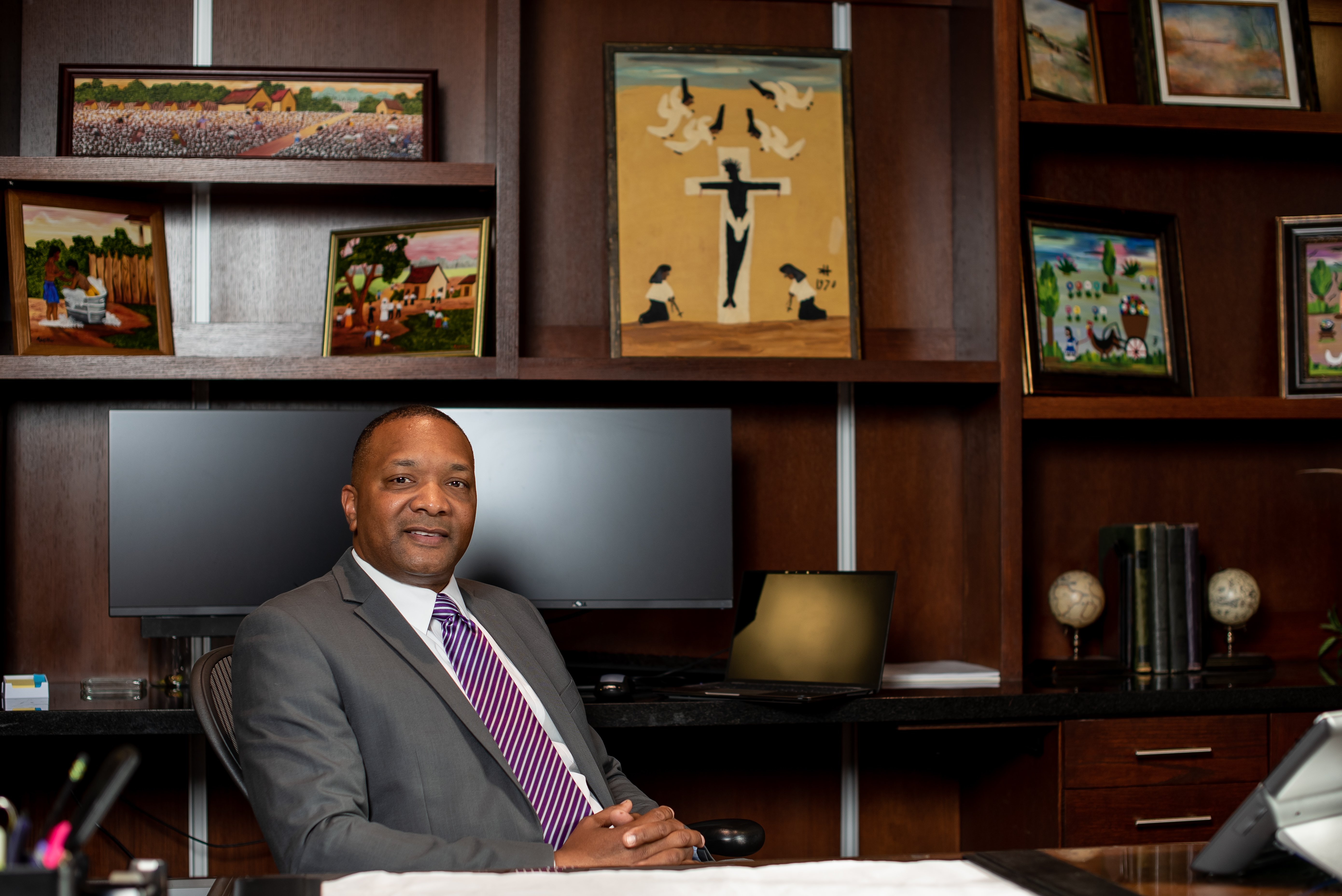 The native of Winnfield, Louisiana, the 18th of 20 children to parents who didn’t get further than the fifth grade, was now the first Black president of a major university in his home state. “I try not to think about it because I feel like my story is like many others where I had a lot of great mentors and people who helped open doors for me,” Jones said. “It’s a tremendous responsibility because you understand the weight of the moment and realize it’s bigger than just me.”

Jones’ upbringing helped lead him to this moment thanks to the lessons he learned from his parents. Just 30 minutes east of Natchitoches, his father worked in the lumber industry, while his mother stayed home. While unable to reap the benefits of further learning themselves, Jones notes that his parents ensured their children would progress much further. “My mom knew that we would not get more than a single bite out of the apple, and we could not afford to get the least out of our classes if we wanted to be successful,” Jones said. “Learning from her, as well as my 13 sisters, I realized early on to heed the wisdom and knowledge from such amazing Black women at an early age.”

Jones’ father helped instill the work ethic he still uses to this day, saying that one should always work like you’re earning more than you already are. Years later, Jones put that hard work to use while also gaining a mentor he never thought he would in a local funeral director named Ben Johnson. A self-made millionaire, Jones worked for Johnson’s lending business, along with his funeral business, where he got to see up close what it meant to honestly give back to others.

“As a Black man, he was not going to rely on the city to invest in our community. He believed it was solely his job to do so,” Jones said. “I watched Mr. Johnson give his money and his time to the community. Seeing him be that selfless, especially from a person who could do whatever he wanted with his money and time, had a profound impact on me.”

Jones has been no stranger to working, and that’s putting it lightly. He attended Northwestern and graduated with a business administration and finance degree. Jones then went to Grambling State University to earn his master’s in international business and trade. He didn’t stop there, attending the prestigious Southern University Law Center to earn his law degree.

After earning two degrees in business, why go to law school? Jones goes back to the lessons he learned in Winnfield and a family situation that changed his outlook. “My mom is from Caster, Louisiana, and we had a fairly large plot of land that was ours that we lost due to a minor issue,” he said. “When I saw that, I knew that I didn’t want to see my family or others go through the same thing we did and wanted to help.”

If you ask Jones what he really does, he’ll tell you he’s a teacher. Being an educator is all he ever wanted to be. And he did that in various ways beginning in 1994 at Northwestern State as a faculty member teaching a variety of business, international and law classes at the institution. Although he’s now a university president, Jones still makes his way into classrooms now and then, taking him back to his teaching days when he may not have realized that he was a trailblazer.

“I had three Black teachers at Northwestern State, and I realize now how impactful that was for me,” he said. “I had the privilege of being taught by people who looked like me, and I was able to teach to others and show a new generation that they also could reach this level of higher education. Now, as the university president, I hope that I can be an inspiration for Black educators to reach even higher.”

As a Black university president in the south, Jones is a member of Kappa Alpha Psi Fraternity, the American Bar Association, and the Louisiana State Bar Association, speaks three languages, and is only 30 minutes away from his hometown. Jones has accomplished a lot throughout his life, but even he says if he could meet with his younger self, he would have to do a good bit of talking. “Looking back, I placed a lot of limits on myself because of where I was from, the school I went to, and more,” Jones said. “If I could give my younger self some advice, I would say not to place a limit on yourself and trust your capabilities. If you work hard, good things can happen. And make sure that you’re always looking for opportunities to help someone else behind you.”